11 surprises from Phil Mickelson, other LIV players’ lawsuit against the PGA Tour 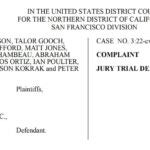 A group of 11 LIV signees filed an antitrust suit against the PGA Tour.

Much of the messaging between LIV Golf and the PGA Tour has been veiled to date, but not anymore. The war for men’s professional golf has officially reached the court room, with Phil Mickelson, Bryson DeChambeau and nine others filing a lawsuit against the PGA Tour for anticompetitive practices and restraint of trade.

The truth is, we always knew it would get here. We just didn’t know when. Technically, the first court room appearance for LIV golfers this year took place just weeks ago when Ian Poulter and three others earned their way into the Scottish Open via a U.K. claims court. This lawsuit, however, is much meatier.

The complaint is 105 pages and outlines many transgressions the plaintiffs have with the PGA Tour’s regulations and suspensions handed out this year. Since we know you don’t have the time to read it all, we’ve pored through it and outlined a number of surprises — some bigger than others — that will help you better understand what is at stake.

1. Not all LIV players are involved

Many players have competed in LIV Golf events and been suspended or made ineligible by the Tour, but only 11 — the LIV 11, some have been calling them — have filed this lawsuit. Mickelson and DeChambeau are joined by Poulter, Talor Gooch, Hudson Swafford, Matt Jones, Abe Ancer, Carlos Ortiz, Pat Perez, Jason Kokrak and Peter Uihlein.

No Dustin Johnson, no Brooks Koepka, no Sergio Garcia or Lee Westwood or Henrik Stenson. There’s an interesting partition there. Some players resigned their Tour memberships, like Johnson, Garcia and Westwood. Others may not have been interested in suing at this juncture. Each player’s involvement level with LIV Golf has been different to this point, as you can read about below, incurring different levels of suspension and punishment to this point.

It wasn’t clear in early March if Phil Mickelson had been suspended by the PGA Tour. Commissioner Jay Monahan spoke at the Players Championship about Mickelson’s incendiary comments — Mickelson told journalist Alan Shipnuck he was aiming for leverage against the PGA Tour — but did not acknowledge if the Tour had suspended Mickelson. Wednesday, we learned he was … eventually.

According to the complaint, Mickelson was suspended on March 22, with the potential to apply for reinstatement two months later on May 22. The reasoning, according to the documents, was for recruiting players to join the LIV series. Mickelson then applied for reinstatement on June 20. He was denied, the Tour said, because he had competed in the LIV Golf London event. Then, on July 23, the Tour extended Mickelson’s suspension again after he competed in the LIV Golf London event. At that point, according to the complaint, Mickelson would not be allowed to apply for reinstatement until March 31, 2024. He had rung up quite the bill of wrongdoings, per the PGA Tour, and that was before be played in last week’s LIV event at Trump Bedminster.

3. The suit was filed in … Northern California?

The PGA Tour is headquartered in Florida, which is also the state of residence for many plaintiffs in the lawsuit, yet the suit was filed in the Northern California district. Why? The complaint explains.

For starters, the PGA Tour conducts more events in California (six) than in any other state. The lawsuit alleges that the plaintiffs were first issued an anticompetitive threat in Southern California in 2020 (think: the 2020 Farmers Insurance Open, where a players’ meeting took place). Then, at the 2022 Genesis Invitational, again, more alleged threats took place, also in California. In short, many discussions and events in the timeline of LIV Golf have occurred in the Golden State, likely making it the most advantageous district to file within.

4. Bryson had to back track

Remember when Bryson DeChambeau released a statement on Feb. 20? It said, “As long as the best players in the world are playing on the PGA Tour, so will I.” According to the court documents, by that point DeChambeau had already signed with LIV Golf. And he wasn’t alone.

According to the lawsuit, DeChambeau was “forced to publicly profess loyalty to the PGA Tour.” How, exactly? That will be something we look forward to learning in further proceedings. Notably, DeChambeau was also allegedly sanctioned by the PGA Tour for “talking to other Tour members about the positive experience he had had with LIV Golf.”

For golf fans who have criticized Monahan for not speaking up enough, or acting bluntly enough, just know that anything he has said, or will say, is considered fodder for this lawsuit. Look no further than quotes from Rory McIlroy in 2019, long before some of the plaintiffs were well known players, which state that the European Tour is a “stepping stone” to the PGA Tour. Those words are included in an argument for the PGA Tour’s dominance in the market. The same goes for quotes from Paul McGinley from earlier this year, simply in response to Mickelson’s comments. And quotes from Mickelson on the Player Impact Program funds. And from Joel Dahmen and Jason Kokrak and Rickie Fowler and Jordan Spieth…

All quotes matter, folks! Davis Love III’s impassioned explanation of a boycott, which was delivered just this week, was also cited in the complaint. Of all the quotes that matter, the words Monahan has delivered in players meetings at Torrey Pines or the Honda Classic or the Genesis Invitational over the last three years will be used frequently by the LIV 11’s legal representation.

Just because this lawsuit is LIV golfers vs. PGA Tour, Inc., doesn’t mean information about other governing bodies will be held confidential. In fact, quite the opposite. Augusta National, ever private in its dealings, was allegedly involved in various ways.

According to the complaint, Augusta National had representatives present at an “emergency meeting” of the PGA Tour Advisory Council, which took place directly following the initial announcement of LIV Golf’s first field. The filing alleges that Fred Ridley himself “personally instructed a number of participants in the 2022 Masters not to play in the LIV Golf Invitational Series.” The suit also claims that Ridley declined a request from Greg Norman to meet to discuss the LIV business model. (For what it’s worth, Ridley said at the 2022 Masters that Augusta National “did not disinvite” Mickelson from this year’s tournament.)

The PGA Tour may be the defendant, but the entire ecosystem of men’s pro golf is included in the complaint, mainly out of alleged coercion. The PGA Tour’s “strategic alliance” with the DP World Tour is repeatedly labeled “unlawful” in the lawsuit, and is referenced as a “group boycott” of the plaintiffs and their right to “practice their profession.”

Included in the complaint is reference to a July 2021 meeting in Malta, where DP World Tour CEO Keith Pelley met with sponsors of LIV Golf. A detailed breakdown of the meeting, which has been reported on by Bunkered, states that Pelley saw the biggest hurdle to a “new entrant” entering the pro golf ecosystem was the “mighty power” of the PGA Tour and its relationship with the DP World Tour.

8. The Tour’s previous decade of performance will be analyzed

The plaintiffs seem keen to compare their earning power via the PGA Tour to professional athletes in other sports. For instance, the average salary increases of NFL, NBA, MLB and NHL players from 2014-2019 are all cited within the lawsuit. For the NFL, that’s 15%, a greater increase than any other major pro sport. For the plaintiffs like Mickelson, the perceived salary increases are the Tour’s average purse increases, which increased by 2.5% per year, on average.

Much the same is being said for the the PGA Tour’s popularity and TV ratings. Cited in the suit is the following:

“Out of 27 PGA Tour tournaments for which data are available, 16 tournaments (almost 60 percent) had viewership in 2019 that was below the five-year average for that tournament.” How is this data being used? To argue that the Tour’s product of broadcasting events had grown “stale.” Remember how “all quotes matter,” from above? Rickie Fowler’s comments on the Tour’s product inspiring more opportunity, which he made at the PGA Championship in May, are also cited in the suit.

9. We’re going to learn that no one plays fair

There have been many moves made by the PGA Tour, alleged by the plaintiffs in the case, that make it seem like a bully. The suit calls moves by the PGA Tour “a bearhug,” implying that it threatened the European Tour in various ways to usher in the strategic alliance. The suits also claims that the PGA Tour’s vast relationships with other governing bodies were used to keep LIV Golf from launching. There are allegations that the Tour threatened to withhold defecting members’ retirement pensions.

How true are all these claims? It remains to be seen. But LIV is airing all of them out in the open. If some or all of them are true, it will show that the PGA Tour was not playing fair with just about anything it could leverage against the upstart league. If some of the more egregious claims are proved untrue, it will look like the plaintiffs were playing an unfair game in the courtroom.

10. The ‘ecosystem’ can mean many things

A major point of disagreement among the many parties in this war for pro golf is the ecosystem. That word is printed 30 different times in the lawsuit. What it’s referring to is the pro golf world, as it existed in, say, June 2019. The PGA Tour, the Korn Ferry Tour, the DP World Tour, the Asian Tour, PGA Tour Canada, etc. They all make up the ecosystem.

PGA Tour and DP World Tour executives have long claimed that they would have been welcoming to LIV Golf or the Premier Golf League, so long as they work within the current ecosystem.

But the ecosystem is not just the tours. The ecosystem, as defined by the plaintiffs, includes sponsors, media organizations, financiers, coaches, agents, etc. The plaintiffs argue that the various pressures of the PGA Tour against LIV Golf extended throughout the ecosystem, thus creating an inhospitable one to a new entrant. See: “group boycott” referenced above. One example included is the R&A revoking the Open Championship exemption given to the Asian Tour Order of Merit winner because the tour had accepted sponsorship from LIV Golf Investments.

11. A reminder: This is just the beginning

When plaintiff(s) file lawsuits against a defendant(s), the initial complaint is just the initial complaint. It is littered with alleged information, plenty of which is surely accurate but not necessarily all of it. The legal process will take a long time, with built-in time for responses, discovery, etc. The PGA Tour will respond. It already did, in a memo to players Wednesday afternoon. It will respond legally, too, with plenty of information of its own. Like Norman said in one of his scathing letters, “Commissioner — this is just the beginning. It is certainly not the end.”