10 surprising players who lost their PGA Tour cards on Sunday 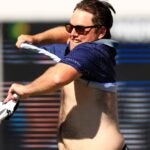 Harry Higgs in February during the final round of the Waste Management Open.

Two former Masters champs. A former PGA Championship winner. A former world No. 1. An Olympic silver medalist. And a star of one of the wildest moments of this, or maybe any, golf year.

All gone. For now at least.

This week’s Wyndham Championship, as the last event of the PGA Tour’s regular season, was also the last regular-season chance for players to lock up Tour cards for next season. Through the season-long FedEx Cup competition, the top 125 players both move on to next week’s playoffs and secure playing privileges — while those who don’t start to look at other avenues for 2022-’23.

Harris English, for example, finished 186th in the standings, but is good for next season thanks to his victories last year. Others aren’t as fortunate and have work to do.

For a few, the easiest move will be to unlock a career money list exemption. Others will have to play — those who finished from 126th to 200th in the FedEx Cup standings are qualified for the Korn Ferry Tour Finals, a three-tournament series that puts that group of 75 with the top 75 from this year’s Korn Ferry Tour regular-season points list, and 25 PGA Tour cards will be handed out to the top 25 players at the end of that series.

So for some, like the ones below, there’s still a chance all could be back as regular PGA Tour cardholders in short order. Here are 10 players who lost their full status, at least for now.

10 players who lost their PGA Tour cards on Sunday

Danny Willett (130th) — The exemption the Englishman earned for winning the Masters in 2016 is up. That victory was his only one to be recognized by the PGA Tour; he’s won seven times on the now-named DP World Tour, including three times since his win at Augusta National.

Harry Higgs (136th) — Higgs had three top 25s this season, but missed 17 cuts. But he’ll be forever remembered for his par on the 16th hole during the final round of the Waste Management Open, where he then celebrated with the arena-like gallery — by lifting up his shirt.

Zach Johnson (140th) — The next U.S. Ryder Cup captain, Masters champ and Open Championship winner can use an exemption as the 14th all-time money winner. This season, he had four top 25s.

Rory Sabbatini (141st) — The Olympic silver medalist was playing on his all-time money winner exemption. This season, he tied for third in his second event, the Shriners Children’s Open, but had only one other top 25 after that.

Charley Hoffman (150th) — Hoffman had qualified for the FedEx Cup Playoffs for all 15 of its years. He has an exemption as the 33rd all-time money winner.

Luke Donald (159th) — The next European Ryder Cup captain and former world No. 1 has used both of his all-time money winner exemptions. This season, he played in 21 events and made 10 cuts.

Brandt Snedeker (171st) — The nine-time Tour winner has exemptions as the 22nd all-time money winner. This season, he had two top 25s.

Jimmy Walker (190th) — His exemption for winning the 2016 PGA Championship is up. This season, he played 14 events and made six cuts.