10 dumb mistakes that ruin your round 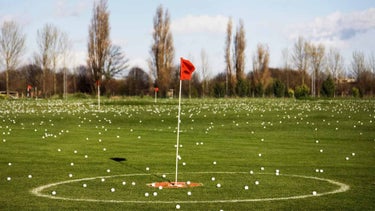 Want to start shooting lower scores in 2023? Here, with the help of our expert teachers, is a list of mistakes you can focus on correcting.

Want to start shooting lower scores in 2023? Here, with the help of our expert teachers, is a list of mistakes you can focus on correcting.

Looking to get better in 2023? How about drop five shots in 2023? That seems like a good place to start. Here, as we creep closer to the New Year, we’ll use this five-part series to explain how you can kiss those five strokes (and possibly more?) goodbye in no time.

Part 1: How to maximize a quick warmup

Let’s face it, there are lots of ways to ruin your round. The shanks. Blowup holes. Nerves. Bad decisions. We could go on forever, but some errors are more critical than others, and if you key in on those uber-important ways to stop killing your once-promising rounds you’ll finally start recording those scores you are capable of.

Here, straight from them, are the dumb mistakes you need to start avoiding now.

10 dumb mistakes that ruin your round

This list starts before your round does. It’s hard to set yourself up to be successful when you arrive just a few minutes early for your tee time, but almost all teachers agree that it’s the way in which you warm up that hurts your game. If you have only 10 minutes to warm up, don’t just take 15 swings with your driver or furiously hit random clubs without aiming at a target. Teachers vary when it comes to suggestions on how best to spend that quick warmup — stretching (lots say stretching), wedges, chipping or putting are common — but they all agree it’s best to get there a little earlier, not to rush, practice with a purpose (stretch, woods, chip, putt, etc.) and stroll to that first tee with confidence.

2. Stop! You aren’t playing from the right tees to begin with

While your friends might go back and play from the blues, your game (and handicap) prove you are more likely to succeed one tee box closer. And you know what? You’ll probably have lots more fun! Here’s a popular formula we like to reference when it comes to figuring out the best golf-course length for you.

3. Hitting shots you aren’t confident in

Hitting a baby fade on the range when you are used to hitting a draw? Don’t sweat it and just own it for that day, says Sean Hogan, the director of instruction at the Leadbetter Academy.

Little things can tweak your ball flight on any particular day, so Hogan means don’t spend all round trying to fix it. Don’t fight it. Stick with it. Own it. Be confident in it. And if the issue is still there after your round or again for your next, then it’s time to check in with a teacher.

We asked Jason Baile, the director of instruction at Jupiter Hills Club in Tequesta, Fla., one thing he wished more amateurs knew about equipment.

“I wish more amateurs would know that more loft in their fairway woods is better for them,” he said. “Having the ball get up in the air quickly and easily is probably something they are working so hard to do with less loft, and it really hurts their golf swing and their ability to flight the ball. The ability to get it up in the air quickly is huge. They are losing distance by not hitting the ball high enough. And they are unable to stop it onto the green if they have to hit it onto the green.”

Just don’t do it. Even pros don’t go at every flag. Aim for the middle of the green and favor the side with less trouble. Even Bernhard Langer has said he sometimes does this when he has a lead down the stretch. He calls it being “cautiously aggressive.”

6. Learn how to find the fairway when you are struggling

Spraying it all over off the tee? Enter the fairway finder.

World GOLF Teachers Hall of Famer Mike Adams says, in short: tee it low. This makes you hit more down on the ball, and if you stand a little closer and flare your lead foot out, it will force you to rotate and, worst case, your mishit will be on the heel and lead to a harmless cut that still finds the short stuff. That’s better than the block or hook you might get with a draw.

“It’s going to find the fairway every time,” Adams said. “All you are trying to do is carve it in play.”

Keep the ball in play, avoid penalty strokes and stop playing the hero shots. You can still punch out from a dire situation, find the green and two-putt for bogey. Call that a win and move on.

“Trying to eliminate doubles is easier than trying to make more birdies,” says Mike Bury, a GOLF Magazine Teacher to Watch. “… Minimizing doubles is a tricky one, because there are a lot of ways to make a double, but it’s knowing that if you are in trouble, don’t play the miraculous hero shot, just get it back in play.”

We like to think we hit the ball farther than we actually do, but truth is we often don’t take enough club. In fact, this GOLFTEC data from last season proved high-handicaps miss short wayyyyy more often than they miss long. Golfers with a handicap of 21 or higher missed short 70 percent of the time. So if you are in between clubs, remember that stat.

This is one I admittedly struggle with, but its importance was stressed often at the Top 100 Teachers Summit. Teachers preach it. So do 15-time major champs. In a November 2021 interview with Golf Digest‘s Henni Koyack, Tiger Woods explained coaching up his son, Charlie.

“I’d watch him play and he’s going along great, he has one bad hole, he loses his temper, his temper carries him over to another shot and another shot and it compounds itself,” Tiger said. “I said, ‘Son, I don’t care how mad you get. Your head could blow off for all I care just as long as you’re 100 percent committed to the next shot. That’s all that matters. That next shot should be the most important shot in your life. It should be more important than breathing.’”

10. Getting too cute around the greens

This is where teachers say a simple miss can lead to a big score. Don’t overcomplicate things. Unless you really know how to hit a high-lofted wedge, chip with a safer club or, if you are close enough to the green, use your putter. A bad putt will be much better than a bad, bladed or chunked wedge. And if you are trying to figure out the secret to chipping and pitching arounds the greens, just remember to let the bounce of the wedge do the work for you.